About the Province of Bohol

Bohol is the 10th largest island of the Philippines. It is an oval-shaped island province located in Central Visayas. It is bounded by Cebu in the east; Bohol Strait in the west; Camotes Sea in the north; and Mindanao Sea in the south. Tourism on this attractive, idyllic and scenic island has begun to develop. The world-renowned Chocolate Hills can be found in the province. 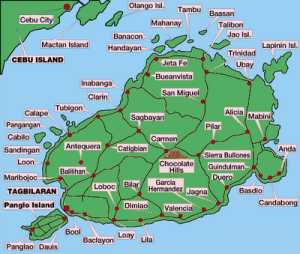 The islands´ interior is generally flat but dotted with numerous haycock-shaped hills popularly know as the Chocolate Hills. The southern part is basically mountainous, with deep gullies and gorges that slope abruptly to the sea. The northern section has alluvial valleys and low-lying hills.

The coastline, except in the north is characterized by woodlands, grass, and dense swamplands. 75 small islands can be found off the mainland, with Panglao considered as the largest. The climate varies in different areas – warm and dry along the coast; cold and humid in the interior. Rainfall, however, is evenly distributed.

A Brief History___________________________
Created on March 10, 1917, Bohol derives its name from the early village of Bool, near what is now Tagbilaran. The island came under Spanish rule in 1565. Two major rebellions against the Spaniards happened in this province: the Tamblot revolt in 1621 and the Dagohoy revolt, which happened from 1744 to 1829 and is considered the longest revolt in Philippine history. The province is also known as the home province of Carlos P. Garcia, the fourth President of the Philippines.

The People______________________________
Boholanos are known to be good traders and often referred to as the “Ilocanos of the South”. This is because of their frugality and being industrious. The majority of the people speak the Cebuano dialect and English.

Commerce and Industry_____________________
Agriculture is the main industry in the province. Products mostly-generated are rice, coconut, and corn. Fishing can be found in the northern towns, particularly those beside the Camotes Sea. Among the minerals the province produces are manganese, iron, and tin. Bohol’s handicrafts are famous throughout the country. These include baskets, items woven with saguran fibers, abaca mats and slippers, the buntal hats of Talibon, and spellcraft. These crafts are sold in souvenir shops all over the country.

LEYTE: A big outrigger boat departs from Ubay (north Bohol) to Bato in Leyte, and another boat to Maasin in Leyte.

MANILA: A large superferry departs from Manila to Tagbilaran twice a week. Domestic airplanes are another alternative. 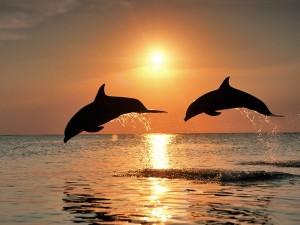 MINDANAO: A ferry services the Jagna,Bohol- Butuan route. The Tagbilaran-Cagayan de Oro route is being serviced by hydrofoils and ferries.

Additional Information about the Island of Bohol__________________________
Tagbilaran City is the province´s principal port and commercial center. Hotels, restaurants, and shops, where handicrafts and locally made products are sold, can be found throughout the city.

The first legend tells of a fight between two giants who threw stones and sand at each other for days until they were so tired and exhausted that they gave up and made friends. They left the island but didn´t, however, tidy up the battlefield, leaving the Chocolate Hills. 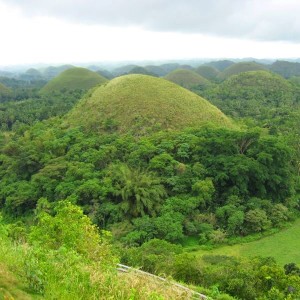 The second legend is a lot more romantic. Arogo, a young and unusually strong giant, fell in love with an ordinary mortal, Aloya. After Aloya´s death, Arogo cried bitterly. The Chocolate Hills are proof of his grief, for his tears turned into hills.

Some geologists say Bohol lay underwater in prehistoric times. Volcanic eruptions caused unevenness in the bottom of the sea which was gradually smoothed and rounded by the movement of the water.

Most geologists, however, say the explanation as nonsense. Even though the geological origin of the hills has not yet been explained beyond doubt, the consensus is that they were weathered formations of a kind of marine limestone lying on the top of impermeable clay soil. Comparisons have been made with the Hundred Islands of North Luzon. 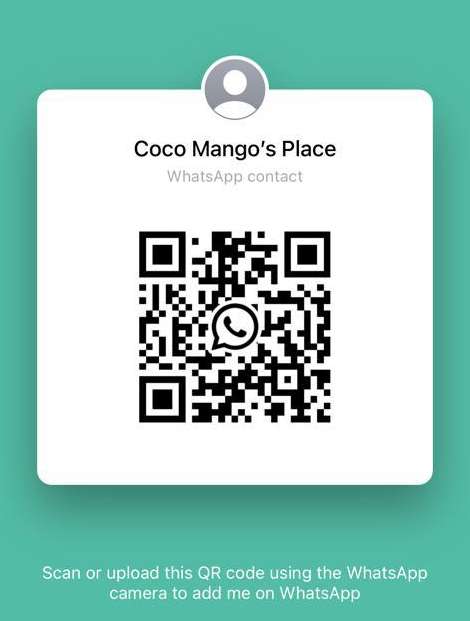 Rate Us on Tripadvisor